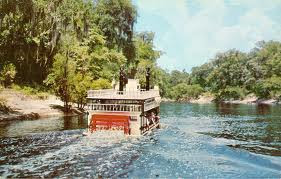 -One-
Natty had awakened crying for her bottle. No one responded
to her cries. Natty climbed over the railing of her crib and slid down the leg to the floor. To her knowledge no one knew of her ability to climb out of the crib on her own. Many a time she had done this and had helped herself to pieces of pie, cake and other goodies left in the refrig- erator when no one was around.
Natty was only two years old but was much brighter than most two year olds. When no one was around it was her play time, like putting clothes pins on the terrier, Doc's, tail and buttering the cat, Tim, with margarine.
After helping herself to fudge in the fridge, Natty looked around the kitchen and the room that served as a living room. Nothing of interest in ether one of those rooms.
Looking into the room that served as a bedroom for both her older brother and sister, there was not much in the way of toys there, either, except for maybe a few of her sister's trinkets.
Her first mission was to spill a box full of beads behind the bed. Next was to paint her face, Indian war paint style, with her sister's lipstick and dropping the tube in the blankets while she used the bed for a trampoline. The next thing to go was a small box with an array of earrings that also got trampled into the blankets.
Tiring of this she ventured back to the kitchen to play with Doc and Tim. They weren't there. The kitchen door had been left ajar. Maybe they're outside, she thought.
Natty toddled out the door. Something deep inside told her that this wasn't right, that she shouldn't go outside. Her big sister had told her to stay inside when they weren't there, that there were bad people outside. She hadn't been able to go outside ever since her mother had gone away to visit someone that was ill. Her big sister had also told her that mother may be gone for a long time. Natty did not understand any of that but she could feel the negativity in her sister's voice.
-1-
It wouldn't hurt to just look for Doc and Tim she thought.
She had not found them on the front deck of the river boat. They weren't on the back deck either. Where could they be?

Just then she heard Doc barking in the woods a short dis- tance from the river boat. Natty went down the ramp on all fours fearing she would fall off if she tried standing up. Once on the ground she got up on her feet again and toddled towards the woods.
"Dac, Tay, wis yu," Natty called lifting a big evergreen branch to look on the other side for her elusive friends. "Thi hiss iss!" Natty said excitedly when she spotted Doc chasing a squirrel. "Ca cm him!" Natty called scoldingly, with her two little fists firmly planted on her hips.
Tim was rubbing himself against her legs and purring loudly, throwing her off balance and sending her to stagger and fall back with her feet up in the air.
The squirrel ran up a tree after tiring of playing “you can't catch me” with Doc. Doc came to Natty who was still lying on her back and licked her vigorously on the face, smearing the lipstick even more. Doc, tired from playing with the squirrels, laid beside Natty, panting. Natty fell asleep with her arm around her friend Doc.
"I tell you this is it. This is where those kids live. On
many an occasion I go by this way to my favourite fishing spot and I swear I've seen the baby in there all by her- self," George declared as he pointed to a dilapidated river boat.
"But these children have a mother, I've talked to her a few times personally when she was having problems with her alcoholic husband," Ms. Lacombe informed him.
"Well I've never seen any grown-ups here for a long time."
George knocked on the door, the door swung open inwardly, and George stepped in.
"You can't just walk in!" Ms. Lacombe exclaimed.
"Why not? there ain't no one around and if there ain't any grown-ups around to look after the baby, would it not be you're responsibility to take charge?", George queried.
-2-
She had to agree he was right but she still felt nervous about intruding in someone's home unannounced. She had been beaten severely once by a drunken, Coke-bottle wielding husband, when she had entered a home trying to protect a mother and child. She never went to someone's home anymore unless the mother and children met her at the door, or she had the police with her, if she thought it may be a violent situation.

All of the rooms were empty.
I don't understand, George said. Just this morning I saw
the baby on the front deck all by her self." Ms. Lacombe relaxed. It had been a wild goose chase. After all, the mother had to be around, she still received Mothers' Allowance at the same address.
"If something would have happened to the mother we would
have been notified. Maybe the mother had just been out of sight when you had observed the child alone," Clare suggested. Stepping off the ramp onto the dirt trail, Ms. Lacombe thanked George Stewart. "I appreciate your concern and for coming to us. I'll look in to this further, I promise, and I will notify you of any new developments in this case, if we find any."
"Thank you ma'am, I wouldn't have bothered you, It's just that I'd hate to see children hard done by, especially when there is no need for it in a good community like ours."
Back at the highway where she had left her car, Clare turned to George and told him that she had to return to the river boat that she had forgotten her purse. She had dropped it in the grass purposely just before emerging from the woods.
"Do you want me to go with you?" George offered. He had
become quite attracted to this woman he had only met a few times in coffee shops. She was the first person that had come to his mind when he first became concerned about the river boat kids, but he held off until he had become reasonably sure he had reason to officially involve the Childrens' Aid Society.
"No, I'll be quite alright, thank you anyway. I promise I'll
notify you if any thing new develops in this case."
-3-
Clare began turning towards the trail then stopped, like she had suddenly remembered something she had forgotten. George lingered, trying to think of something to say. Any excuse to see her again would do but he couldn't think of anything. He stood there downcast.

Clare began to say something at the same time he did. Clare tried again, "Sorry go ahead"
"Would you mind if I dropped by at your office some time?"
He asked shyly, wringing his hat." Clare smiled at his simplicity and said, "Wednesdays are slow." George grinned and almost whooped. Instead he said, "Wit is!" He turned and ambled off towards his four by four parked in front of her car.
George started his truck and roared away, peeling rubber as he went. “Men are like little kids with a new toy, when they get what they want”, Clare observed shaking her head, smiling. She started down the trail once more.
She had become suspicious of some thing when she had looked in the closet of the room that served as the master bedroom. What few clothes that Ruddy had owned were neatly folded and stacked but dust-coated. They didn't appear to have been used for a long time. She had determined to hide some where and wait for school to get out, when Ray and Sandy would come home. The one thing that puzzled her and gave her another reason to come back was, what did they do with the baby when they weren't home? They couldn't afford a baby sitter on their Mother's Allowance.
"I'm telling you Sandy, some one is going to get wise, we have to move on.”
“I know Ray, but can't we at least wait until school is out?"
"I don't think we have that much time left. I caught this
fisherman snooping around the river boat a couple times when I stayed home from school to intercept calls for mom. I guess I must be getting good at imitating her voice. Unless you want to give it up! If we do we will be separated and put in different homes, you know. If that happens we may never see each other again. I read once in the National Enquirer about twins that had been separated
-4-
To be continued
Posted by cynthiagrlx@.com at 18:24