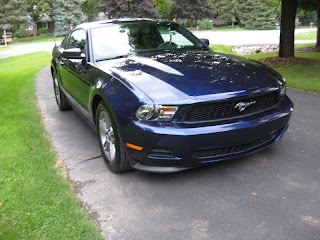 at the age of eight and they weren't reunited again until seventy-some years of age."
"Do you really think that's what could happen to us?", Sandy
asked.
"Yes I do. The hardest part would be losing Natty. As mischievous as she is, she is a smart, lovable kid and I love her very much. I'd kill any one who would try to harm her.", Ray confirmed with emotion. "She's our little sister, we can't just let strangers take her away!", he said, clenching his fists.
"Look!” Sandy pointed to a blue '93 Mustang parked down a way from the trail.
"I think we have company," Ray observed.
"Maybe it's just someone that broke down," Sandy suggested.
"I don't think so, I smell social worker. You go through the
woods on the right of the trail and I'll take the left. Keep out of sight of the river boat until I signal you it's safe,” Ray instructed Sandy.
The riverboat was dark and silent. There was no sign of life anywhere around it. Natty should have been up by now, raising up a ruckus, anxiously awaiting their return from school but there was nothing, not a sound.
Ray's stomach began to knot up; something was wrong! Where was Natty? He slowly emerged from behind the bushes he had hidden in a dozen feet from the riverboat. Stooping down low to the ground, Indian style, he quickly peered through each of the windows. No one was on board. In a half panic he began shouting, "Natty! Natty, Where are you? Sandy! The coast is clear, help me look for Natty. She's not on board."
Doc came running out of the bushes yapping and jumped on Sandy wagging his tail, joyous at the return of one of his masters.
"Well where did you come from?", Sandy asked picking up the
terrier. Doc vigorously licked her face in response. Natty had been hiding behind a bush.
-5-
She had seen one of the bad people enter the river boat. The person went from room to room searching for something, then the person came out, walked down to the foot of the ramp and stopped to look around. The person had gone around the ramp then had dropped down on hands and knees and crawled under the ramp. Natty was too fearful to come out from behind the bush. She had decided to stay there until her big brother came home. He would know what to do. She played with Doc to entertain herself. Then she saw Sandy not far away, hiding behind some trees. At the sight of Sandy, Doc had jumped out of Natty's arms and ran to her. Sandy was yelling for her.

Natty stood up unsteadily and yelled back happily, “Ith he, ith he.”
Sandy turned and saw her standing by a big oak. She ran to her and picked her up, crying.
"I thought they had taken you away," she told Natty. Sandy held her tightly fearing that she would vanish if she let her go. Natty pointed to the river boat yelling, "Tha he, tha he." Sandy knew that she meant any strange person female or male. Some one was still in the vicinity of the river boat. “Ssh! OK! I understand,” Sandy said. At that Natty became silent.
Sandy waved at Ray to come to her and pressed her index finger cross ways to her lips, indicating for him to be quiet.
“What is it?,” Ray asked in a near whisper, on
approaching Sandy.
“There's someone here, very close to the riverboat,” Sandy informed him.
"OK, Natty, point for me where he is." Sandy asked Natty.
"Tha he, tha he." Natty said pointing with her tiny finger
at the side of the river boat that faced them.
“Inside the boat?.” Ray asked, looking at Natty's big brown eyes. Natty swung her head from left to right vigorously, indicating no. Ray studied the port side of the riverboat carefully, trying not to miss any of the details with which
-6-
he had become so familiar. “Where could a person hide outside near the riverboat?,” he thought, “There is only one place. Thanks sweetheart, I know where the person is.”
Ray kissed Natty on the cheek; Natty giggled. He turned toward the boat. “Whoever it is, he or she is under the ramp,” Ray informed Sandy.
It was starting to get dark. Ray picked up a piece of dry wood two feet in length and approximately one inch in diameter. He approached the ramp slowly and cautiously, holding the stick ahead of him. Stooping down he looked under the ramp. He was in luck, who ever it was had their back toward him. Ray stuck the stick in the persons back and said, "OK, whoever you are, don't make any sudden moves or I'll put a hole in your back."
Clare froze, not daring to move a muscle. She didn't want an extra hole in her body.
"OK, alright I'll do whatever you say, just don't shoot me."
"Move back very slowly and stand up," Ray ordered. Clare
crawled backwards as quickly as she could, feeling the gun
prodding her in the back at her every move. Once clear of the ramp she stood slowly and stuck here hands in the air.
"Please walk up the ramp and enter the kitchen. Sandy, get
some rope." Ray yelled over his shoulder.
"What are you going to do with her?", Sandy asked picking up
a coil of rope on the deck.
"I don't know yet, maybe I'll cut her up in little pieces
and feed her to the fish." Clare made a loud gulping sound.
"Your not serious are you?," Sandy asked nervously.
"Na! I heard it in a movie. I wondered how impressive it would sound if I said it for real. By the looks of her I guess it was," he laughed.
"Make sure all the knots are tight," he advised. Sandy gave
each knot an extra tug.
-7-
"All done. What do we do now?", Sandy asked. Natty sat on the floor staring at the strange lady.

"Well what do you think Natty? Maybe I'll let you put clothespins on her ears and toes just like you did to Doc. That would be fun wouldn't it?", Ray taunted. Natty bounced on the floor yelling, “Ya! Ya! Ya!”
"What kind of stuff are you teaching that baby?", Clare
asked in a huff.
Ray stuck the stick in her back and said, "We'll let you know when we want you to talk lady. Sandy would you make us something to eat, I think there's a dead mouse in the trap under the sink. You can fix it up for the lady social worker here." Clare felt her stomach heave at that thought.
"OK, lady I've seen enough social workers in my life. I can
smell them. do you know what they smell like?” Clare shook her head. “They smell like typewriter ink, musty paper and sweaty armpits. Were not going to let you separate us. That was a unanimous vote by all three of us. Show her your vote Natty."
Natty raised her arms and slapped her hands together above her head. Sandy set some sandwiches on the table. She then picked up Natty and sat her in her high chair. Natty cried and wouldn't eat.
"I know what's wrong," Ray said picking up the high chair and setting it in front of Clare. Immediately Natty started eating. “She wants to keep watch on the lady she had enough sense to stay away from when we were not here."
"Maybe it was the sweaty under arms that gave you away," Ray suggested to Clare.
"Hey, what do you know! Already our little sister can smell
out a social worker from regular people."
"Listen I'm only out here to try and help if there is a problem. I already know there is, your mother hasn't been around here for a long time. Clare informed them." The room went silent.
"How do you know?" Ray asked.
-8-
Posted by cynthiagrlx@.com at 20:44